Nebraska Lottery tickets are bearer instruments, so the first thing to do (especially if you have a large winner) is sign and complete the back of the ticket to establish ownership.

There is never a fee to claim Nebraska Lottery prizes. Prizes up to $500 can be claimed at any Nebraska Lottery retailer. Some retailers reserve the right to pay prizes only up to a certain level due to security concerns. 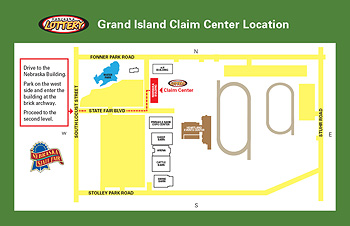 Note: Due to the regular operations of the Nebraska State Fair, there will be occasions when the State Fair office is closed or unable to process lottery claims. We make every attempt to provide this information here, but suggest you contact the State Fair in advance to verify the schedule before claiming.

The Nebraska State Fair office will not be processing claims until further notice.

The Nebraska Department of Revenue offices in Norfolk, North Platte, and Scottsbluff are open from 8:00 a.m. to Noon, Monday through Friday. Nebraska Lottery prizes may be claimed at the Regional Lottery Claim Centers in these locations during these hours, or by appointment after these hours. To make an appointment, call the Nebraska Department of Revenue at (800) 742-7474 (toll free in NE and IA), or (402) 471-5729.

To claim prizes by mail, send a completed claim form to:

By law, the Nebraska Lottery automatically checks for back taxes and child support on prizes of more than $500.

Prizes above $5,000 have state and federal taxes automatically withheld, at 5 and 24 percent, respectively.