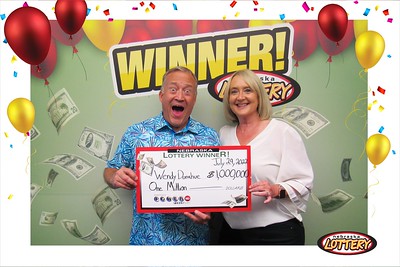 Before taking home the $1 million prize, Donahue said the biggest thing she’d ever won was a cake in a cake walk when she was 14.

Donahue and her husband Kevin heard there’d been a $1 million ticket sold at their Baker’s, so they decided to dig through their numbers.

The Donahues quickly put their winning ticket in the safe until they could make it down to the Nebraska Lottery’s Lincoln offices on July 29. When the day came, they carefully placed the ticket in her purse and put it gently in the backseat of their car.

“That was the most stressful drive of my life,” Kevin said.

Powerball is a multi-state jackpot game currently offered by 45 state lotteries, the District of Columbia, Puerto Rico and U.S. Virgin Islands. The odds of winning $1 million playing Powerball are 1 in 11,688,053.52 while the overall odds of winning any prize are 1 in 24.9.