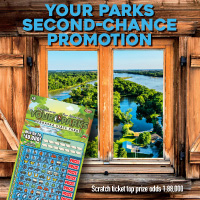 Win a trip to a Nebraska State Park with the Your Parks Second-Chance Promotion!

Submit a non-winning $5 Nebraska State Parks ticket (game number 1214) online at nelottery.com using your MVP Club account. Each eligible Scratch ticket can only be entered once. Tickets must be entered by 11:59 p.m. CT on August 23, 2022.

One drawing will be held on August 24, 2022, to draw two winners. A player may only win one prize in this promotion.

Players may enter as often as they like, but an eligible ticket may only be entered once.

The actual tickets from which numbers are submitted are required for contest prize verification and should be retained until the contest has ended and prizes have been awarded. Winners who cannot provide their entry tickets for verification will be disqualified.

Winners will be contacted by a Nebraska Lottery representative following the drawing, and winner names will be posted after their entry tickets have been received for verification.