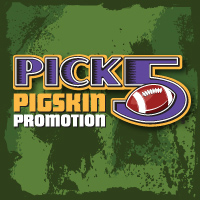 Between July 13 and August 3, every Nebraska Pick 5 purchase of $1 or more on one ticket will generate a voucher for the Pick 5 Pigskin promotion. On the voucher there will be a seven-digit Prize Voucher number to enter using your MVP Club membership at nelottery.com for your chance to win.

One drawing will be held on August 5, 2021, to select 14 winners. All entries received from July 13 through August 4 will be eligible for this drawing.

Entry vouchers are required for contest prize verification and should be retained until the contest has ended and prizes have been awarded. Winners who cannot provide their entry vouchers for verification will be disqualified.

Winners will be contacted by a Nebraska Lottery representative following the drawing. Winners will be posted on this page after their entry vouchers have been received for verification. Voucher numbers from the winning entries will not be posted.