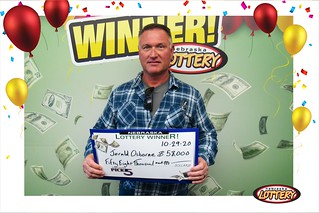 Osborne purchased his winning ticket from Casey’s General Store #2656 in Fullerton. Osborne’s ticket contained five quick pick plays for the October 24 drawing, one of which had the winning combination 03, 04, 18, 19, 38.

Osborne said he used to only buy Powerball tickets until his dad Tom Osborne—not that one—told him to try Pick 5. His dad died a while back, but Osborne still plays Pick 5.

Usually Osborne buys his tickets at a shop in Atkinson, but while passing through Fullerton, he stopped at Casey’s to use the restroom. He felt obligated to buy something, so he picked up a few Pick 5 tickets.

He said he checked his numbers on the Nebraska Lottery website on Saturday night and discovered he’d hit the jackpot.

“The next sound I heard was my jaw hitting the floor,” he said. “I couldn’t go to sleep.”

Osborne said he’s planning on paying off a few bills and saving the rest of his winnings.