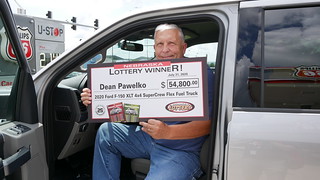 Dean Pawelko of Lincoln is the seventh and final winner of a silver 2020 Ford F-150 XLT 4x4 SuperCrew Flex Fuel truck in the 25th edition of the Nebraska Lottery’s $2 Truck$ & Buck$ Scratch game.

Nebraska Lottery officials presented Pawelko with his prize on Friday, July 31 at U-Stop.

Pawelko’s lawnmower ran out of fuel, so he popped over to U-Stop to fill up a gas tank. He went inside to pay and, on a whim, bought a Truck$ & Buck$ ticket. The first one he’d ever played.

“I bought it and scratched it off on the trunk of the car,” he said. “I saw three of a kind and I knew I’d won something.”

Pawelko went back inside to check the ticket, but there was a line, so he decided to go over to another gas station, still not having checked to see what he’d won.

“The clerk turned white when he saw it,” Pawelko said. “He said, ‘You won the last truck.’”

Pawelko and his wife Sherry said they were very excited about the win. They’d recently bought an RV and had been shopping around for a way to haul it.

“He was thinking about getting a silver truck,” Sherry said. “It was meant to be.”

The 25th edition of the Nebraska Lottery’s popular $2 Truck$ & Buck$ Scratch game features the 2020 Ford F-150 XLT 4x4 SuperCrew Flex Fuel truck as its top prize. Players have the opportunity to win one of seven Ford F-150 trucks as well as cash and Ethanol-enriched fuel prizes. The truck prize is valued at $54,800, which includes $1,246 for costs associated with ownership and state and federal withholding paid by the Nebraska Lottery of $2,740 and $13,152, respectively. The odds of winning the top prize in Truck$ & Buck$ are 1 in 300,000, while the overall odds of winning any prize are 1 in 3.65.