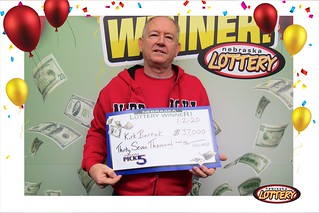 Bartek purchased his winning ticket from Weston 92 BP at 2345 County Road K in Weston. The winning ticket contained five plays, one of which contained the winning numbers 08, 10, 15, 19 and 29 from the December 27 drawing. Bartek’s win splits the jackpot with another player who bought a ticket with the same numbers in Lincoln.

Bartek said he’s played the same Pick 5 numbers for years. He only made one change after getting married when he started picking 15, which is part of his wife Beverly’s birthdate.

“I was on the computer checking the numbers,” Bartek said. “I had to check twice, three times to make sure I’d actually won.”

Bartek said he’s a regular player of Pick 5, Pick 3 and MyDaY and is planning to keep playing the same numbers.

He’ll be using some of his winnings to do some work around the house.