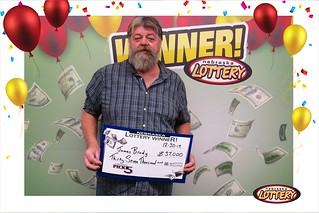 Brady purchased his winning ticket from Tobacco Shack #68 at 4741 Hodrege Street in Lincoln. The winning ticket contained three plays, one of which contained the winning numbers 08, 10, 15, 19 and 29 from the December 27 drawing. Brady’s win splits the jackpot with another player who bought a ticket with the same numbers in Weston.

Brady said he’s been playing the same numbers on Pick 5 since it began, but he can’t remember exactly the reason he started playing them, he said, but he knows why he keeps playing them.

“I just felt like they would get lucky,” he said. “I couldn’t believe it.”

Brady said he’ll be using his winnings to get himself out of debt and he’ll put some into savings.

As for his winning numbers, they’re not going anywhere, he said.

“I’ll keep playing them,” he said. “I play Powerball, maybe I’ll get lucky on that one.”