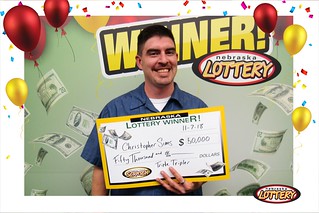 When he claimed his prize on November 8 Sims said that he’d scanned his ticket before scratching it and saw that it said to bring it to the Nebraska Lottery offices, but left it unscratched and headed to work, thinking he’d won $1,000.

“I got to work and told the boss and he told me to scratch it,” Sims said. “I did and it was crazy.”

Sims said that the win came at a good time because his car was recently totaled in a crash. He’s planning to buy a new vehicle and put some into savings for his three year old son. Sims, like all Nebraska Lottery big winners got a free lottery t-shirt, which he’s planning to use to tell his fiancé about the win.

“I’m going to give her the Winner shirt for Christmas,” Sims said. “That should really surprise her.”