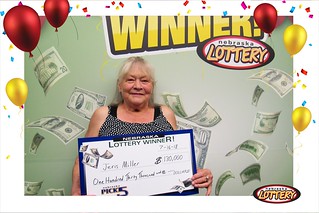 Miller said she hadn’t checked the numbers yet when she got a call from her daughter telling her there was a winner in Yutan and offered to help her check the numbers.

“I read them to her three times and she wouldn’t believe me,” Miller said. “I got so mad!”

Her daughter drove her from Yutan to the Nebraska Lottery office in Lincoln to claim her $130,000 prize on Monday afternoon.

Miller, who has owned and operated Jeris’ Cafe in Yutan since 1978, said that the money from her Nebraska Pick 5 jackpot will help her to retire soon. She’s not sure when she’ll be selling the business, but said that the win has made the decision a little easier.