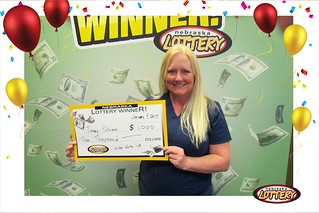 This is the second time Putnam has claimed a prize for Winter White Ice. She previously won $1,000 November 18. Coincidentally, she bought both winning tickets at the same Kwik Shop in Bellevue.

Putnam told Lotter officials that despite winning before, it was just as exciting the second time with her heart racing when she learned she had won the second prize.

After winning the first $1,000 prize, Putnam planned a trip to Branson, Missouri with her family. They had the date picked but were considering waiting when Putnam bought another ticket. She said that if she lost they would postpone the trip but if she won they would keep their original plans. Luckily, Branson doesn’t have to wait.