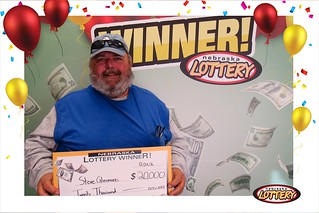 Steven Glinsman of Ashton won a total of $20,000 playing Winter White Ice from the Nebraska Lottery.

While claiming his prize December 29, Glinsman told Lottery officials that he was not entirely sure he had a winner until inspecting the ticket further. “I had to do about a triple take,” he said.

The winning ticket was the second ticket Glisnman played after the ticket he had played immediately prior was a non-winner.