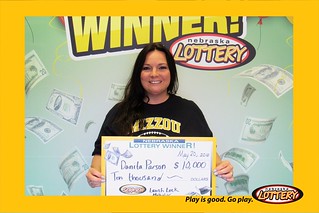 Parson purchased her winning ticket at Casey’s General Store #3298, 112 Talmadge Street in Kearney. Scratching the ticket, she revealed matching numbers with a corresponding prize of $10,000.

There are twenty $10,000 top prizes available in Lavish Luck Multiplier. Parson is the ninth person to claim a top prize to date.

While claiming her prize on May 20, Parson told Nebraska Lottery officials that she learned she had won after calling Lottery headquarters to check her ticket. “It took me a minute to realize I had won because of the dollar amount,” said Parsons. “I was in total disbelief.” She plans to pay bills using her winnings then save the rest for the future.