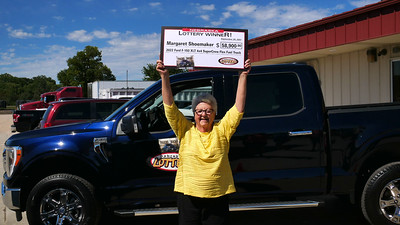 Shoemaker said she just retired from her job a couple of days before buying her winning ticket. She said she’d won $10 the week before so she thought she’d give it another try and bought herself two more tickets.

Even though she’s not sure if the truck will fit in her current garage, she’s planning on keeping the truck and enjoying it.

“I’m gonna drive the truck around town, you betcha,” Shoemaker said. “And I’ve got the queen wave down pat.”

The 27th edition of the Nebraska Lottery’s popular $2 Truck$ & Buck$ Scratch game featured the 2022 Ford F-150 XLT 4x4 SuperCrew Flex Fuel truck as its top prize. Players had the opportunity to win one of eight Ford F-150 trucks as well as cash and Ethanol-enriched fuel prizes. The truck prize is valued at $58,900, which includes $1,162 for costs associated with ownership and state and federal withholding paid by the Nebraska Lottery of $2,945 and $14,136, respectively. The odds of winning the top prize in Truck$ & Buck$ were 1 in 336,000, while the overall odds of winning any prize were 1 in 3.69.