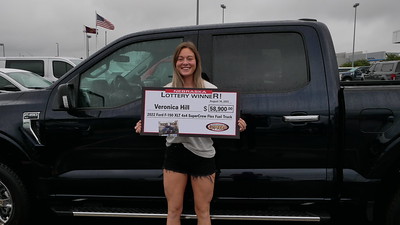 Nebraska Lottery officials presented Hill with her truck on Tuesday, August 16 at the Anderson Ford dealership in Lincoln.

Hill said she’s never bought a Scratch ticket but she has played them. It’s become a tradition for her grandparents to buy a bunch of Scratch tickets when family comes over for dinner.

Her grandparents purchased 12 tickets, enough for everyone at the dinner table and Hill scratched hers off and revealed the top prize.

The 27th edition of the Nebraska Lottery’s popular $2 Truck$ & Buck$ Scratch game features the 2022 Ford F-150 XLT 4x4 SuperCrew Flex Fuel truck as its top prize. Players have the opportunity to win one of eight Ford F-150 trucks as well as cash and Ethanol-enriched fuel prizes. The truck prize is valued at $58,900, which includes $1,162 for costs associated with ownership and state and federal withholding paid by the Nebraska Lottery of $2,945 and $14,136, respectively.