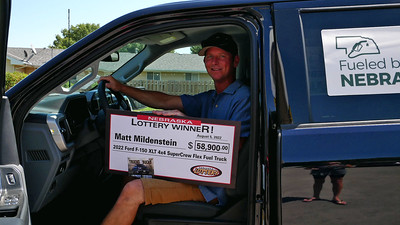 Mildenstein said he’d been shopping for a truck to replace his current ride for quite some time. He was looking for a used truck, but those prices were a little high, but his Truck$ & Buck$ win came at just the right time, he said.

Mildenstein said he purchased 20 Truck$ & Buck$ tickets at one time. The first one he scratched off was the Truck winner, so he handed out the rest of them to people at work.

The new truck will be an upgrade from his old one, he said, but it’s definitely a familiar vehicle. His current pickup is also a Ford F-150 and there’s some family history there too.

“We’re a Ford family,” he said. “My dad drives Fords, my brother, my sister, my brother-in-law, my wife and me, we all drive Fords. This is a huge blessing.”