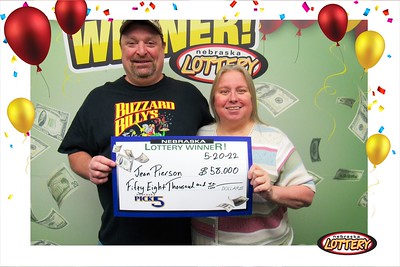 Pierson and her husband Rob Pierson have been daily players for the past couple of years and they always replay the same five numbers.

The Piersons only check their tickets when it’s time to buy another set of plays, so their April 13 win went undiscovered until May 7.

While pulling into the parking lot to check their ticket and grab a new one, Rob said, “Somebody’s gotta win, why not us?”

When the clerk scanned her ticket, her mouth dropped to the floor, Pierson said.

“I was shaking so bad,” she said. “She had me sign the back of the ticket right away.”

Pierson said she usually jokes with the clerk when she checks her ticket, asking them if they’ll have someone from security to escort them with their millions. This time she almost wished she did have someone watching out for her.

The ticket went into hiding right away when they got home and Pierson wouldn’t even tell her kids where she hid it. She did tell Rob who had some idea about what they could do with it.

“I told her, ‘I guess we’re having steak tonight instead of hamburger,” he said.