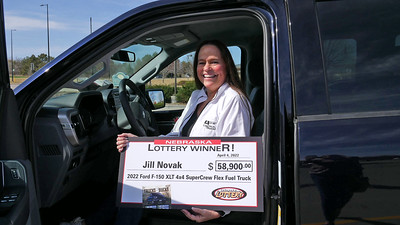 Nebraska Lottery officials presented Novak with her truck on Monday, April 4 at The Still.

Novak said her husband Terry is the one who usually buys the tickets, but she’s the one who scratches them off.

While at home, Novak scratched off a couple of small winners and then saw she’d also won the truck. She immediately texted a photo of the ticket to Terry just to make sure she was reading it right.

“We got two other Scratch tickets and they won $4, so he gets those,” Novak said. “I’ll take the truck.”

Novak brought her ticket down to the Nebraska Lottery the day she won. She said she didn’t want to have to worry about losing it before she could claim her truck.

She said she and her husband are regular players, but this win came as a shock.

I think the most I’ve ever won was maybe $10,” she said. “You don’t think this is ever going to happen to you.”