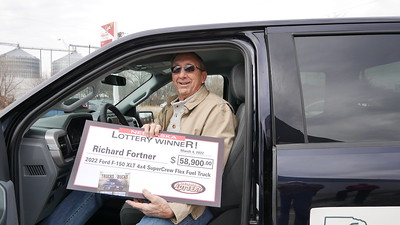 It was a thirst for something fizzy that let Fortner to buying his winning ticket, he said.

“My wife loves fountain soda,” he said. “So the other day we had nothing to do so she says to run up to Ceresco and buy her a pop and get a couple of Scratch tickets, so I do that.”

His wife, Kathleen Fortner, described herself as a big fan of pop.

“I am the refill queen,” she said.

Fortner brought Kathleen her drink and sat down to scratch his tickets while she talked on the phone. He scratched off three pig symbols in a row and revealed the truck prize.

He wasn’t sure he was reading it correctly, but he told his wife he thought he might have won a truck. She hung up immediately and they called the Lottery to confirm.

As far as driving his new truck, Fortner’s not entirely sure what he’ll do. He’s already got a pickup, so he might have plans for the truck he won.

“I don’t know exactly,” he said. “I had a thought that I may give it to my grandson. But then again, I may not.”