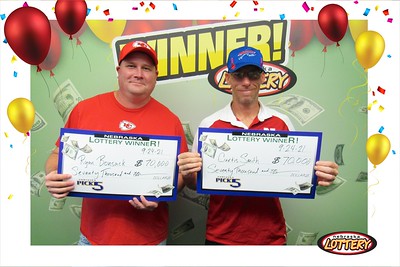 Smith and Bonsack are friends and have been pooling their tickets for the past year and a half. They each buy one ticket good for thirty days’ worth of drawings.

They were heading to golf league when Bonsack found out that a winning ticket had been sold at Love’s. He remembered he’d bought a ticket there and joked with Smith that he had the winning ticket.

Smith remembered that he’d also bought a ticket at Love’s he’d left it in the glovebox of his pickup while they went to play golf. When they came back, they checked their numbers with a flashlight.

“He got so pale,” Bonsack said of Smith. “We just started screaming. I was worried we might have woke up the whole neighborhood.”

The ticket got packed away in a Band-Aid box until they had a chance to come to Lincoln to claim their prize on Friday, September 24.

Bonsack said he’s going to pay some bills with his share and Smith is thinking about taking a trip somewhere.