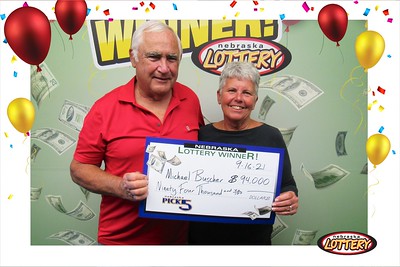 On the evening of September 15, Michael was downstairs watching the news on TV and waiting for that night’s winning numbers to come on. He’d bought a couple of extra Powerball tickets because of the high jackpot. He paid close attention to the Powerball numbers, but kind of zoned out for the Pick 5 numbers, he said.

“I caught the first few and then the 30 at the end,” he said. “They sounded like our numbers so I ran over to the computer to check.”

“We didn’t really sleep too much after that,” she said.

The Buschers said they’re planning on helping out their kids and grandkids with some of their winnings and their grandkids, some of whom just started college. Michael’s also hoping to buy himself a pontoon boat.