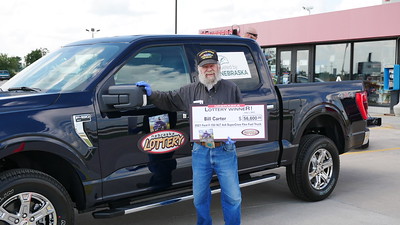 Bill Carter of Cozad is the seventh and final winner of a 2021 Ford F-150 XLT 4x4 SuperCrew Flex Fuel truck in the 26th edition of the Nebraska Lottery’s $2 Truck$ & Buck$ Scratch game.

Carter said that he’d been joking with the clerk when he bought the ticket, saying he needed some gas so he might as well buy a Truck$ & Buck$ ticket to try to win one of the $500 ethanol fuel cards offered in the game.

“I said, ‘Give me a couple of them,’” Carter said. “It just happened to be the goody one.”

Carter’s had some good luck before playing Scratch and Lotto games. He won a big prize a few years back in New Mexico and he also won the $5,000 top prize on the Nebraska MyDaY Lotto ticket.

He said he doesn’t consider himself to be an especially lucky guy, but he plays every once in a while.

Even though he was joking about playing to win a fuel card, Carter said the new truck will probably make filling up a less frequent occasion.

“My old truck, it gets about 14 miles per gallon,” he said. “I’m sure this one gets a tad bit more than that.”

The 26th edition of the Nebraska Lottery’s popular $2 Truck$ & Buck$ Scratch game featured the 2021 Ford F-150 XLT 4x4 SuperCrew Flex Fuel truck as its top prize. Players had the opportunity to win one of seven Ford F-150 trucks as well as cash and Ethanol-enriched fuel prizes. The truck prize is valued at $56,600, which includes $1,199 for costs associated with ownership and state and federal withholding paid by the Nebraska Lottery of $2,830 and $13,584, respectively. The odds of winning the top prize in Truck$ & Buck$ were 1 in 300,000, while the overall odds of winning any prize were 1 in 3.74.