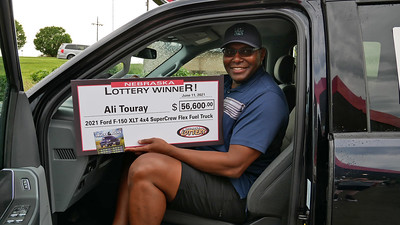 Ali Touray of Omaha is the sixth winner of a 2021 Ford F-150 XLT 4x4 SuperCrew Flex Fuel truck in the 26th edition of the Nebraska Lottery’s $2 Truck$ & Buck$ Scratch game.

Despite only really playing Lotto games and almost never playing Scratch games, Touray decided to start playing Truck$ & Buck$ just a couple months before his win. His old pickup was giving him some troubles and it was time for a new one.

“It started having little gremlins,” Touray said. “I told my wife, I’m too cheap, I don’t want to buy a new truck, I’m going to win that truck.”

Theresa Touray, his wife, said she didn’t believe he could do it. Neither did his brother Karim. They’d tease him sometimes, Touray said, and even though he considered Kum & Go his lucky spot to buy tickets, he nearly stopped playing after getting a few non-winning tickets in a row.

Just before heading out of town to visit family, Touray decided to stop at Kum & Go before packing up the car.

“We were going out of town and we stopped to get gas. I thought, ‘I better go inside, I like the eggrolls here.’”

He got his eggrolls and the clerk mentioned that Touray hadn’t bought any Truck$ & Buck$ tickets for a few days. Touray figured he might as well pick some up, so he bought three and took them home.

He scratched off the tickets and discovered he had won the truck. Touray said he was trouble talking clearly and asked Theresa to call the Nebraska Lottery to verify the ticket.

“She did all the talking,” he said. “I was so nervous, my legs were shaking, I was sweating. I could not believe I won a truck. This experience is just out of this world.”

The 26th edition of the Nebraska Lottery’s popular $2 Truck$ & Buck$ Scratch game features the 2021 Ford F-150 XLT 4x4 SuperCrew Flex Fuel truck as its top prize. Players have the opportunity to win one of seven Ford F-150 trucks as well as cash and Ethanol-enriched fuel prizes. The truck prize is valued at $56,600, which includes $1,199 for costs associated with ownership and state and federal withholding paid by the Nebraska Lottery of $2,830 and $13,584, respectively. The odds of winning the top prize in Truck$ & Buck$ are 1 in 300,000, while the overall odds of winning any prize are 1 in 3.74.