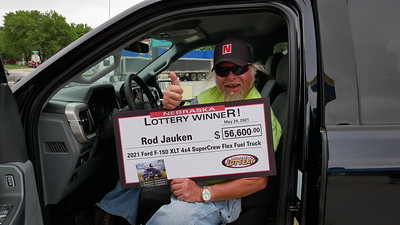 Rod Jauken of Funk is the fifth winner of a 2021 Ford F-150 XLT 4x4 SuperCrew Flex Fuel truck in the 26th edition of the Nebraska Lottery’s $2 Truck$ & Buck$ Scratch game.

Nebraska Lottery officials presented Jauken with his truck on Monday, May 24 at Pump & Pantry. Jauken said his winning ticket was one of the first he purchased this year.

He’d been heading out to Hastings to pick up a load of fertilizer when he heard about the most recent Truck$ & Buck$ truck winner in Columbus and decided to buy a few before heading out to a wedding with some friends on May 15.

He scratched off the ticket, checked it to make sure he’d actually won and had his friends turn around so he could take the ticket home to put it in a safe place.

“I put it in my freezer,” Jauken said. “Because I figured if anything happened, like a fire or anything, it would still be there.”

Dozens of friends, family and well-wishers from Holdrege and the surrounding area showed up at Monday’s event to congratulate Jauken. When they’d ask him what his secret was, Jauken said, “It’s dumb luck, that’s all I can tell you.”

Jauken’s current truck is nearly 20 years old and has over 200,000 miles on it, he said, so this win came at a perfect time.

“I’ve been looking for a pickup and now I have one,” he said. “Honest to gosh, it’s a blessing, I’m telling you.”

The 26th edition of the Nebraska Lottery’s popular $2 Truck$ & Buck$ Scratch game features the 2021 Ford F-150 XLT 4x4 SuperCrew Flex Fuel truck as its top prize. Players have the opportunity to win one of seven Ford F-150 trucks as well as cash and Ethanol-enriched fuel prizes. The truck prize is valued at $56,600, which includes $1,199 for costs associated with ownership and state and federal withholding paid by the Nebraska Lottery of $2,830 and $13,584, respectively. The odds of winning the top prize in Truck$ & Buck$ are 1 in 300,000, while the overall odds of winning any prize are 1 in 3.74.