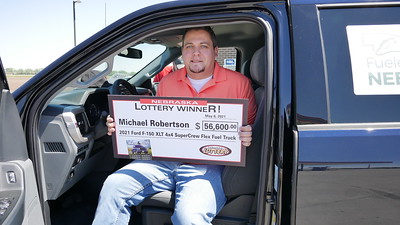 Michael Robertson of Columbus is the fourth winner of a 2021 Ford F-150 XLT 4x4 SuperCrew Flex Fuel truck in the 26th edition of the Nebraska Lottery’s $2 Truck$ & Buck$ Scratch game.

Nebraska Lottery officials presented Robertson with his truck on Thursday, May 6 at Off Campus.

Robertson said he was on his way to baseball practice when he stopped by the convenience store to pick up a couple of tickets. He said he doesn’t play Scratch regularly, just when the feeling strikes.

He went out to the truck and scratched off the barcode instead of the play area. He scanned the ticket on the Nebraska Lottery app on his phone and got the message, “Please take to Lottery”. Unsure of what he’d won, he took it inside to get it checked.

Tammi Macken, assistant manager at Off Campus scanned it and saw Robertson had won the truck. She hugged him and made him promise he’d take her for a ride once he got his new pickup.

Robertson rushed home to show his wife but she was concerned he’d miss his practice.

Before winning the 2021 Ford F-150, Robertson’s daily driver was a 1995 Ford F-150 he’d had for about 10 years. When he received his new truck, Robertson made good on his promise and took Macken on a quick trip around the block.

The 26th edition of the Nebraska Lottery’s popular $2 Truck$ & Buck$ Scratch game features the 2021Ford F-150 XLT 4x4 SuperCrew Flex Fuel truck as its top prize. Players have the opportunity to win one of seven Ford F-150 trucks as well as cash and Ethanol-enriched fuel prizes. The truck prize is valued at $56,600, which includes $1,199 for costs associated with ownership and state and federal withholding paid by the Nebraska Lottery of $2,830 and $13,584, respectively. The odds of winning the top prize in Truck$ & Buck$ are 1 in 300,000, while the overall odds of winning any prize are 1 in 3.74.