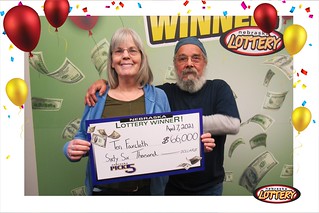 Faircloth purchased her ticket at the Hy-Vee Drug Store at 8404 N 30th Street in Omaha. The ticket contained two quick pick plays for the April 5 drawing, one of which matched the winning numbers 10, 12, 16, 18 and 36.

Faircloth and her husband James claimed their prize on Wednesday, April 7, which is also the same day as their anniversary.

It’s usually her husband who buys Pick 5 tickets, Faircloth said, but she’ll buy a couple every once in a while.

James went into the store to have a clerk scan the tickets for them. The clerk’s eyes got really big, he said, before she quietly told him, “You won.”