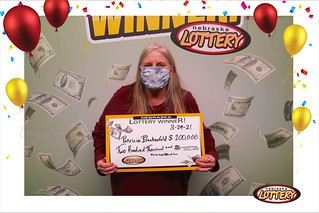 Blankenfeld purchased her winning ticket at Casey’s General Store #2970, 2500 NW 12th Street in Lincoln. Scratching off the ticket, she revealed two matching numbers with a corresponding prize of $200,000.

She’d purchased her winning ticket just a few minutes before heading to the Nebraska Lottery offices to claim her prize. Blankenfeld scanned her ticket at Casey’s but wasn’t completely sure how much she won when the machine said, “Winner, take to Lottery”.

When she got to the Lottery and learned how much she’d won she was briefly in a shocked silence until she started laughing.

“Today’s my birthday,” she said. “It’s usually raining or snowing on my birthday, but this is much better.”

She plans to purchase a new car using the prize money.

There are three $200,000 top prizes available in White Ice Black Ice. This is the first top prize claimed to date.