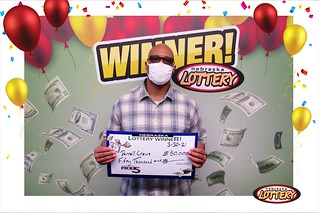 Crews said he plays Pick 5 daily—three plays of his own picks and two quick pick plays—and checks the numbers every night around 9:30 after the daily drawing.

When he saw he’d matched all five numbers, Crews said he had to make sure he was seeing it right. He’s come close before, matching four out of five numbers he said, but nothing like this.

“After I won I hid the ticket in a secret spot,” he said. “I made sure it didn’t go missing.”

Crews said this win will help get him out of debt. He’s currently working two full time jobs and he said he’s hoping he’ll be able to quit one of them.