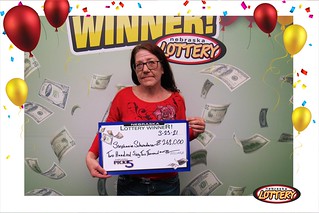 When she saw what appeared to be her winning numbers drawn, Schwaderer said she didn’t believe it.

“I initially thought it was some sick cosmic joke,” she said. “I scanned it with the app on my phone and started yelling, ‘We just won the lottery.’”

She and her husband John drove back into town to scan the ticket at a convenience store to make sure they were seeing it right. They got confirmation and Schwaderer tucked the ticket into her wallet, wrapped in a $2 bill.

Schwaderer said they’ll be using their winnings to pay off their farm and to build a bakery where she’ll make breads, cinnamon rolls, muffins and more.

After the realization set in that she’d won, Schwaderer said it was an amazing feeling.