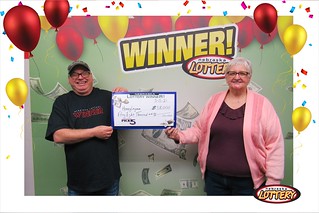 Hank Layman of Beatrice won $58,000 playing Nebraska Pick 5 from the Nebraska Lottery. He’s splitting the prize with Bonnie Jannsen, also of Beatrice, who goes in with him on tickets daily.

Layman purchased his ticket at Mom’s Corner at 566 W Court Street in Beatrice. The ticket contained three plays for the March 12 drawing, one of which matched the winning numbers 10, 18, 21, 34 and 35.

They said they’ve been going in on tickets together for about a year and were thrilled to see their numbers come up.

Layman said he’s going to pay some bills with his share of the winnings but Jannsen isn’t quite sure what she’s going to do yet, though this may be her last Pick 5 jackpot.