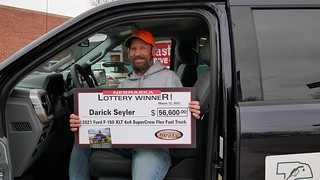 Darick Seyler of Lincoln is the second winner of a 2021 Ford F-150 XLT 4x4 SuperCrew Flex Fuel truck in the 26th edition of the Nebraska Lottery’s $2 Truck$ & Buck$ Scratch game.

Nebraska Lottery officials presented Seyler with his truck on Friday, March 12 at Castle Drive In. He said he quit playing Powerball™ and Mega Millions™ and decided he was going to try something different for a change.

Seyler stopped to grab some beer after work and bought a few Scratch tickets. He headed down the street to wash his truck and, while he was going through the car wash, he decided to scratch off his tickets.

While waiting for the rinse, he scratched off the last one which was the big winner.

“I stopped, I signed the ticket and put it in the console,” he said. “Then I called the Lottery and put it in my safe. I was so shaky.”

Seyler and his wife Jennica said they’re planning on taking the truck out to Colorado this summer on vacation. He said he’s a hunter and a fisherman, so the new truck will come in handy.

Seyler’s current vehicle is a Chevrolet, but this win is going to change a few things for him, he said.

The 26th edition of the Nebraska Lottery’s popular $2 Truck$ & Buck$ Scratch game features the 2021Ford F-150 XLT 4x4 SuperCrew Flex Fuel truck as its top prize. Players have the opportunity to win one of seven Ford F-150 trucks as well as cash and Ethanol-enriched fuel prizes. The truck prize is valued at $56,600, which includes $1,199 for costs associated with ownership and state and federal withholding paid by the Nebraska Lottery of $2,830 and $13,584, respectively. The odds of winning the top prize in Truck$ & Buck$ are 1 in 300,000, while the overall odds of winning any prize are 1 in 3.74.