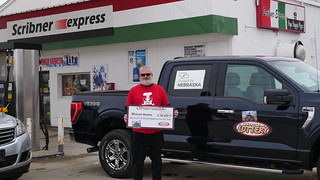 Michael Homes of Scribner is the first winner of a 2021 Ford F-150 XLT 4x4 SuperCrew Flex Fuel truck in the 26th edition of the Nebraska Lottery’s $2 Truck$ & Buck$ Scratch game.

Homes purchased his winning ticket at Scribner Express at 205 Railroad St. in Scribner.

Homes said he’s been playing Truck$ & Buck$ ever since he moved back to Nebraska in 2009. When he bought his winning ticket, he picked up three Mega Millions tickets as well as three Truck$ & Buck$ tickets.

He scratched the ticket off at a friend’s house. When he showed his friends he’d won a truck, they thought he was joking. Homes called the store manager where he’d bought his ticket and then raced back to check and make sure it was actually a winner.

The 26th edition of the Nebraska Lottery’s popular $2 Truck$ & Buck$ Scratch game features the 2021Ford F-150 XLT 4x4 SuperCrew Flex Fuel truck as its top prize. Players have the opportunity to win one of seven Ford F-150 trucks as well as cash and Ethanol-enriched fuel prizes. The truck prize is valued at $56,600, which includes $1,199 for costs associated with ownership and state and federal withholding paid by the Nebraska Lottery of $2,830 and $13,584, respectively. The odds of winning the top prize in Truck$ & Buck$ are 1 in 300,000, while the overall odds of winning any prize are 1 in 3.65.