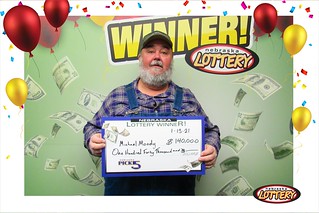 Moody’s ticket was purchased at Harsh Mercantile at 100 Main Street in Purdum. Moody’s ticket was an exchange ticket containing five plays for the November 30 drawing, one of which included the winning combination 08, 24, 27, 29 and 33.

Moody said he typically plays two tickets with five sets of numbers on each, based on birthdays of family members. While watching the news on the evening of November 30 he saw a set of numbers that looked awfully familiar. He thought he’d matched four numbers and won $450.

It turns out he had matched four numbers on one of his tickets. On the other ticket he matched all five and won the $140,000 jackpot.

Moody said his wife has won lottery prizes before, including two $5,000 MyDaY top prizes, but this is his first time hitting it big.

Moody is planning to use some of his winnings to help the local Purdum fire department put up a new building.