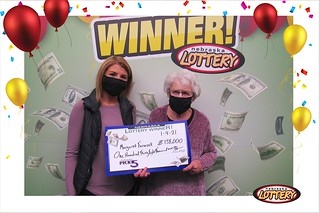 Furasek purchased her winning ticket from Weston 92 BP at 2345 County Road K in Weston. Furasek's ticket was a free play ticket and contained one quick pick play for the December 23 drawing with the winning combination 08, 13, 20, 21 and 27.

Furasek was last into the Nebraska Lottery’s Lincoln offices in July of 2020 to claim a $94,000 prize from a Pick 5 ticket also purchased at Weston 92 BP on July 21.

Every day, Furasek’s husband Tony heads to Weston 92 BP to buy his wife a Pick 5 quick pick ticket. Around 9:30 every night they call their daughter Mary Mika to check the numbers for them on the Nebraska Lottery’s website.

When she claimed her prize on Monday, January 4, Furasek said her second win was just exciting and unexpected as the first.