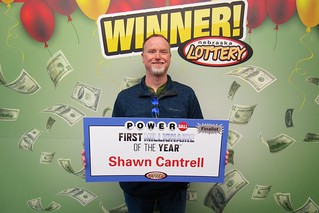 Shawn Cantrell of Lincoln could ring in 2021 as Nebraska’s newest POWERBALL® millionaire. He’s a finalist for the “POWERBALL First Millionaire of the Year” promotion and will have the chance to win $1 million in a special drawing to be held just after midnight on ABC’s broadcast of “Dick Clark’s New Year’s Rockin’ Eve with Ryan Seacrest 2021.”

Cantrell joined the promotion this fall by purchasing a Powerball Power Play ticket and entering the accompanying voucher number at the Nebraska Lottery website, nelottery.com. He was drawn as one of 13 Nebraska winners who won $1,300 and had their names entered in the nationwide “POWERBALL First Millionaire of the Year” promotion.

Out of more than 600 entrants, Cantrell was chosen as one of five finalists competing to win the $1 million grand prize.

Country artist Jessie James Decker is returning as POWERBALL correspondent for the second year and will provide live updates throughout the evening, checking in with the five finalists celebrating at their homes across the country, before revealing the “POWERBALL First Millionaire of the Year” just after midnight on January 1, 2021.