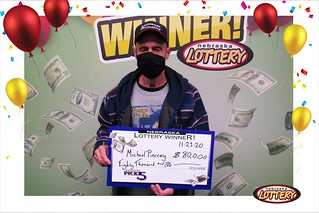 Piercey purchased his winning ticket from Kwik Shop #235 in Lincoln. Piercey’s ticket contained five plays for the November 20 drawing, one of which had the winning combination 07, 11, 22, 34, 36.

Piercey said he was stunned to discover he’d won when he checked his ticket. Not only that he’d hit the jackpot, but also that he’d won on a set of numbers he doesn’t typically play.