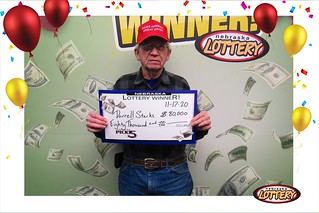 Starks said he’d won $450 after hitting four numbers on Pick five about six or seven times before. While checking the morning paper on Tuesday, he saw that he’d matched all five, but he stayed calm.

“I didn’t get real excited,” he said.

Starks is planning to pay off his truck with his winnings.