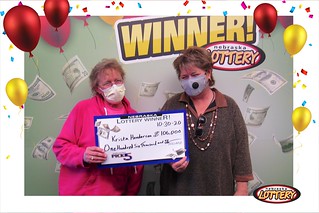 Henderson purchased her winning ticket from Casey’s General Store #1583 at 612 N Webster in Red Cloud. Henderson’s ticket contained four quick pick plays for the October 21 drawing, one of which matched the winning combination of 18, 20, 24, 30, 37.

Henderson’s not sure what she’s going to do with her winnings yet, but she told us what she yelled when she saw she’d matched all five numbers.