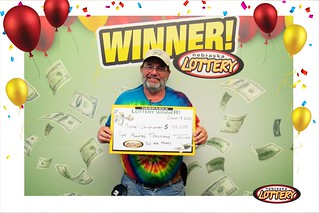 Michael Christiansen of Norfolk won $100,000 playing the 20X The Money Scratch game from the Nebraska Lottery.

Back in March of this year, Christiansen was at the Lottery offices to claim a $50,000 top prize he won playing the Money Clip Scratch game he’d purchased at the same store.

Christiansen said he’s planning to use some of the money to build a garage and put away some for retirement. His daughter died recently, and he said he’s going to try to purchase her home.