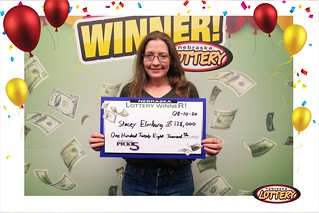 Elmborg purchased her winning ticket at Baker’s #320 at 17370 Lakeside Hills Plaza in Omaha. The winning ticket contained one play with the winning numbers 09, 14, 17, 19 and 22 from the August 8 drawing.

Elmborg said she tries to play her numbers every night but came very close to not getting a ticket for Saturday’s drawing. The person who usually works at the customer service desk at Baker’s was helping out with bagging groceries and almost didn’t get back to the terminal before the game closed for the night.

The numbers on Elmborg’s winning ticket were based on the birthdates of family members, including her son.

She’s planning on using her winnings to find a new place to live for her and her son.