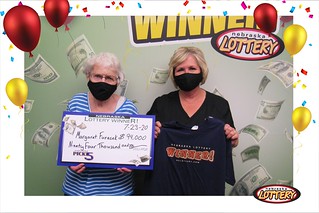 Furasek and her husband have been playing Pick 5 for at least 10 years, they said. They’d matched four of the five numbers a couple of times, but nothing like this.

Every night around 9:30 p.m., the Furaseks call their daughter Mary Miko to look up the winning numbers on the internet for them. This time they got a big surprise.

“He had me reread the numbers over and over,” Miko said. “He called me back in the middle of the night because he thought it might have been a dream.”

The Furaseks are planning to use their winnings to fix up their house and enjoy their retirement a little bit more.

They’d been playing for so long without hitting the jackpot, Miko said, that she told them they’d be better off putting their money in a jar.

“Guess I was wrong,” she said.