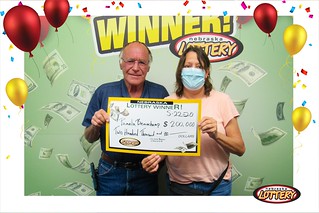 When Beauchamp came to claim her prize at the Nebraska Lottery’s Lincoln office on May 22, she said that since she won, she’d been toting her winning ticket around with her.

“I kept it in a bag I carried around,” she said. “I carried it around for about two weeks.”

Beauchamp said she couldn’t believe she’d won. After she scratched off the ticket, she thought she’d won a $5,000 prize but after scanning it at the store she discovered it was the top prize winner.

“It gives us something to do during COVID,” Goodon said.