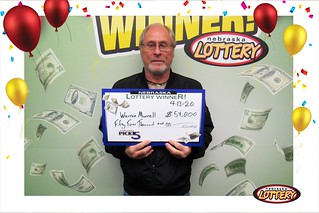 Murrell purchased his winning ticket at Casey’s General Store #2724 at 3003 North 70th Street in Lincoln. The winning ticket contained one quick pick play with the winning numbers 04, 06, 16, 35 and 38 from the April 10 drawing.

Murrell said he plays Pick 5 every once in a while, but said his brother plays almost daily. In fact, he said, a few years ago, his brother won a jackpot from the Nebraska Lottery.

“Mine was bigger though,” he said.

Murrell said he’s planning on paying off his RV and putting in a “man shed” in the backyard of the house he recently bought.