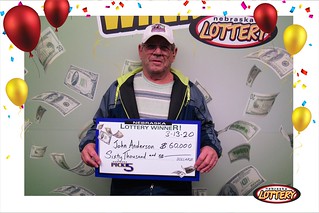 Anderson bought his winning ticket at Tilly’s at 316 W Main Street in Battle Creek. The ticket contained a single quick pick play which matched the winning numbers 05, 28, 31, 33 and 38 from the March 4 drawing.

When Anderson came to claim his prize at the Nebraska Lottery’s Lincoln offices on March 13, he said he only realized he’d won after overhearing a conversation about a winner.

“I didn’t find out about this until Thursday,” he said. “I was at the c-store on Monday and heard the cashier saying there was a Pick 5 winner there.”

Anderson checked his numbers and discovered he’d won the $60,000 prize. Anderson said he buys one Pick 5 ticket a week and bought the winning ticket on his birthday.

He’s planning on saving some of the money and using some to pay off some bills to live debt free.

“It was hard to believe,” Anderson said. “It was a wild moment.”