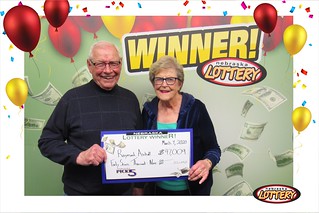 Aschoff bought his winning ticket at Hy-Vee Food Store #10 at 3410 N 156th Street in Omaha. The ticket contained three plays, one of which matched the winning numbers 05, 08, 15, 18 and 24 from the February 27 drawing and another play that matched three numbers, winning an extra $9.

When Aschoff claimed his prize at the Nebraska Lottery’s Lincoln offices, he said he started playing Pick 5 about a month ago and used to play Lotto games quite often back in Atlanta where they recently moved from. He said he was surprised, but his wife Bernie was speechless.

Aschoff said they’ll probably hold on to their winnings for a little bit and then maybe have some fun with it.

The Pick 5 jackpot for February 27 was split between Aschoff and another player who purchased a winning ticket with the same numbers for the same drawing at the very same store nearly a week after he did. The other player, who wished to be unnamed, claimed their prize on February 28.