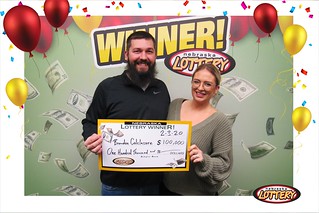 Colclature claimed his prize at the Nebraska Lottery’s Lincoln offices on February 3 and said he’d bought the ticket on a pretty special time.

Earlier that day he’d bought a couple of other Scratch tickets, one of which won a free ticket and the other won a $10 prize. He claimed his free ticket at Kwik Stop and scratched it off. It wasn’t a winner, but since he was still waiting for his car to fill with gas, he purchased another one with the $10 prize. That was the lucky one.

Colclasure and his wife Elizabeth said they’re planning to pay off some debt and they already had a trip to Florida with their kids planned out. The extra money will mean they’ll be able to have a little more fun at character breakfasts at Disneyworld.

“We’re really excited about this,” he said.