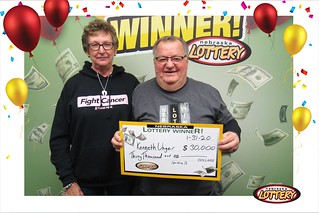 Unger purchased his winning ticket at Merchant’s Convenience Stores at 314 Omaha Avenue in Norfolk back in November but waited until late January to claim the top prize.

“We were keeping it secret,” he said.

Unger and his wife Sandy Unger claimed the prize on January 31 at the Nebraska Lottery’s Lincoln offices. Unger said he’s a regular player, but this is the first time he’s won.

He said he didn’t get too excited when he saw he’d won. He was sitting on the couch with Sandy at the time and had her take a look at it.

The Ungers are planning on using some of the money to put in some new doors and cabinets at their house.