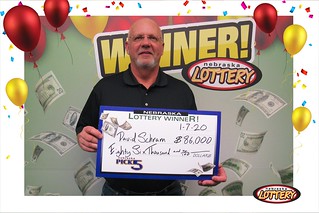 Schram purchased his winning ticket from QuikTrip #599 at 13007 Q Street in Omaha. The winning ticket contained one quick pick play with the winning numbers 03, 05, 27, 28 and 32 from the January 6 drawing.

When he claimed his prize at the Nebraska Lottery’s Lincoln offices on January 7, Schram said he’s played Pick 5 for years and it finally paid off.

Schram said he and his wife Shelley will be using the money to pay off some bills and maybe buy a new bedroom set.

Shelley said it took a little bit of time for the win to sink in and seem real.