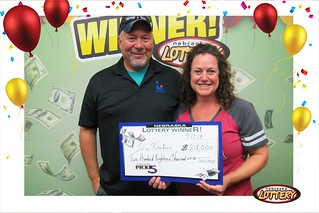 Rondeau purchased her winning ticket from The C Station at 1401 Pine Lake Road in Lincoln. The winning ticket contained two quick pick plays, one of which had the winning numbers 04, 10, 23, 25 and 36 from the September 16 drawing.

Rondeau came to claim her prize on September 17 and said she’d been checking her tickets while working at home that morning when she discovered she won.

“I called my boss and said ‘I’m taking the rest of the day off, I won the Nebraska Pick 5,” she said.

Rondeau then called her husband Dan who she said began to freak out upon hearing the news. Dan headed home and the two drove over to the Nebraska Lottery offices in Lincoln.

The couple are planning to use the money to pay off some bills, Rondeau said.

“The house and car will be all that’s left,” she said. “This is amazing. It’s like a second chance to start over.”