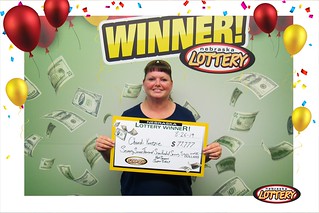 Yantzie purchased her winning ticket at the Nebraska State Fair in Grand Island from the Nebraska Lottery’s event trailer.

Yantzie claimed her prize on August 15 at the Nebraska Lottery’s Lincoln office and told Lottery officials she scratched off the winning ticket on the way home from the State Fair on Sunday.

“I looked down and thought, ‘This can’t be right,’” she said.

Yantzie stopped at a convenience store in Lincoln to check the ticket. The clerk was stunned when the screen showed that she’d won the $77,777 top prize, she said.

Before leaving the state fair, Yantzie, her husband Tim and her sister decided to stop by the Nebraska Lottery’s stand to buy some tickets and spin the prize wheel.

Yantzie bought two of the $10 Scratch tickets and put them away for the ride home while she spun the wheel.

This was the first time Yantzie had been to the State Fair since it moved to Grand Island in 2010, meaning it had been a few years since she participated in a yearly tradition.

“We always went to the Lottery booth at the State Fair in Lincoln,” she said. “We’d always get a few when we were leaving.”

“It wouldn’t be the State Fair if we didn’t play the lottery,” Tim said.

Yantzie said she and her husband are planning on getting a new mattress and possibly upgrading to a new pickup.